Last week I suggested investors do indeed need to be wary if inflation returns to global economies, which of course begs the question, is it in fact returning? In short, yes, it is. But while you should be cautious, that doesn’t mean you should act hastily.

The US is leading the way

It’s not all that long ago that central banks were fretting about inflation being too low, or indeed negative. US consumer price inflation (CPI) bottomed out at about -0.2% in early 2015, while the reading for January 2018 was a relatively spritely 2.1% per annum.

So-called ‘core CPI’, which excludes the typically more volatile food and energy prices, and which the Federal Reserve and other central banks usually pay more attention to, has also risen. Chart 1 below shows a distinct rising trend over the past year and in fact the six-month moving average, which gives you a better view of the underlying trend, has hit the highest reading since 2008.

Chart 1: US core CPI has been trending up 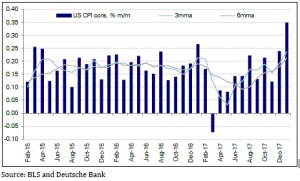 Over the last few years, one of the reasons given for low inflation has been the lack of real wages growth, which makes it hard for households to feel like they’re getting ahead and so keeps a lid on their inclination to go out and spend. At long last, with unemployment at the lowest since the turn of the century, that seems to be changing, with wages growth picking up in the second half of 2017 – see chart 2.

Chart 2: wages growth has picked up which normally takes inflation with it

What people expect inflation will do is also critical in shaping perceptions about price movements, and at the moment it would appear there is a real tailwind behind wages growth with companies more worried about finding good employees than sales – see chart 3 – and as a consequence, planning to pay more to get them, see chart 4.

Chart 3: companies are more worried about finding good employees than sales, so… 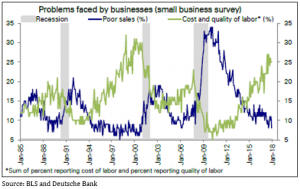 Chart 4: …they are planning to raise wages 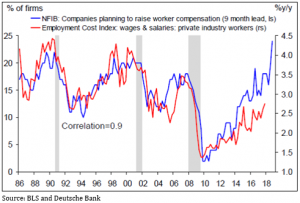 Add to that the near-term kicker of tax cuts putting more money into peoples’ hands and a pick up in general growth, and it’s easy to imagine those inflationary pressures continuing to build.

Although inflation is Australia is lagging behind the US it too is currently trending upwards – see chart 5, though its traction doesn’t seem as convincing. 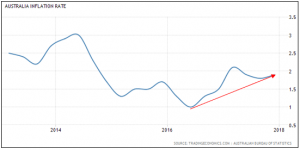 Like the US, Australia’s unemployment rate is at multi-year lows and business conditions have been improving over the past few years – see chart 6.

Chart 6: positive business conditions should be supportive of wage increases,

which are supportive of inflation 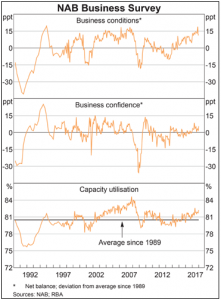 Strong employment growth should eventually add pressure to Australian wages growth, which chart 7 shows has been conspicuously out of whack with history (much like the US had been). Once wages growth is restored, the text books say inflation should follow. 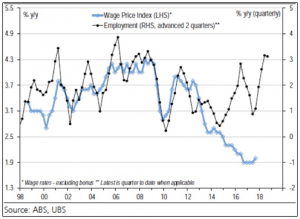 What should you do about it?

While rising inflation represents a significant change to the environment we’ve seen for the majority of the bull run since 2009, its arrival doesn’t necessarily mean markets will have a heart attack and stop dead. After all, rising inflation usually reflects underlying growth, which mitigates in favour of company earnings growing and that remains the single biggest influence on company valuations.

It’s likely markets will reflect a different environment for the pricing of certain assets once inflation does gain solid traction, but these things are rarely a mechanical process and the fact they involve humans in the decision making means you can easily expect the unexpected.