President Trump has pretty much followed the Republican tax script to a tee: arguing cutting taxes will unleash the economy and growth and jobs will inevitably follow, which will more than fund the tax cuts. Unfortunately it’s not necessarily true, and instead it’s entirely possible the US will see the already widening inequality gap get even wider along with the deficit.

Reaganomics theorised that cutting taxes would increase economic growth so much that government revenues would actually increase – the ultimate win-win. Alas, in Reagan’s last budget in 1988 it was estimated that his 1981 tax cuts actually cost the government $264 billion in lost revenue; that’s equivalent to more than $550 billion in today’s money, which is more than what is estimated will be spent on welfare in the US in 2018. Not exactly a win.

That was after the US economy did boom in the ‘80s, but that may well have had more to do with interest rates dropping from 19% to 9%, or a massive increase in government spending on defence and highway construction, or both. The main takeaway is the economy did pick up but after the tax cuts government revenues went down.

Then President Bush enacted huge tax cuts during his term, which cost trillions in lost revenue, but economic growth slowed into the 2000’s. On the flip side, President Obama allowed the Bush tax cuts to expire in 2013 and the momentum of economic growth has increased since.

The message to take away from those points is that economic growth has a lot more to do with overall circumstances than just the level of taxes. But given taxes fund government spending, the consequences of lower government revenue can be profound: lower welfare payments can entrench poverty and reduced education spending fails to make the most of an economy’s most valuable long-term resource, its human capital.

The other consequence of tax cuts has been their apparent effect on inequality, one of the most debated aspects of particularly the US economy since the GFC. The ‘Gini coefficient’ measures income or wealth distribution within a country as a gauge of inequality: perfect equality is 0, perfect inequality is 1. The U.S. tops the list as the most unequal nation – see chart 1.

Chart 1 – the US is the most unequal society 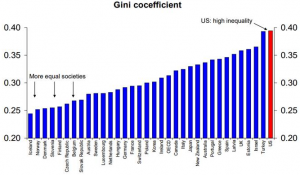 And chart 2 suggests tax cuts don’t help inequality at all. 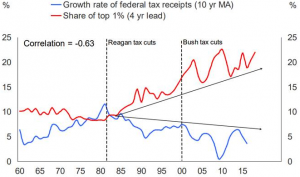 President Trump is trying to get tax cuts through the US houses. He recently released a nine page outline of how his administration plans to amend the 74,000 pages of the tax code, so it’s just a little light on detail.

Considering Reagan’s tax legislation took four years to plan and negotiate and was ushered through Congress by one of the most popular presidents of the modern era, we could be waiting a long time for any tax changes to come from the Trump administration. Meanwhile market commentators are fond of attributing rising stock markets at least in part to the promise of tax cuts, frankly I think the market is smarter than that.