A government that controls its own currency can never, ever run out of money.

Because the Australian government is the issuer of our currency, it can create Australian dollars at will.

A tiny proportion of this money comes from the printing presses in the form of cash, the rest comes from keystrokes on a computer. Every time the government pays someone’s pension, or pays a Medicare refund, or pays a contractor for work done, it is creating brand new dollars. And it does so by simply pressing a button.

A lot of people find this idea challenging: if something is limitless, how do you determine its value?

The days of our currency having some kind of specific physical backing ended in 1971 when Richard Nixon took the US off the gold standard.

The same point was made by Alan Greenspan, who was the head of the US Federal Reserve (their central bank) between 1987 to 2006. In testimony to a US House Committee he said, “there’s nothing to prevent the federal government creating as much money as it wants in payment to somebody.”

Understanding this concept is the single most important part of Modern Monetary Theory (MMT) and underpins why it is so transformative in understanding how our economy could work.

Government spending is not funded by taxes

That last sentence might come as a bit of a shock. But if you think about it, why would the government, which can print as much money as it wants, need to raise money from anyone else?

Just imagine a friendly bloke from the government knocked on your door and said we’re giving you this Aussie dollar printing press to keep in your garage (I know, this is absolute fantasy, but stick with me). If you wanted to do a spot of shopping, or buy a car, there’d be no reason to “raise” dollars from anyone else, you’d just fire up your printing press and roll out the cash. Although this analogy sounds almost absurdly simplistic, it’s the same for the government.

Whenever you read or hear the phrase “tax revenue” or “tax income”, you’ll now know they’re thinking about it the wrong way.

There is a constraint

At this point, anyone schooled in conventional economics would be shaking their head and saying, “don’t be daft, we all know that if you print too much money you get inflation, and you’ll end up like Zimbabwe”.

Rest assured, if MMT is paranoid about anything, it’s inflation.

There is indeed a constraint on how much a government can spend, which is the available resources in the economy. Once you hit the limit of resource capacity, be that labour or physical goods, prices will start to go up and, bingo, you’ve got inflation. And that’s not a good thing.

There are a couple of ways of looking at controlling inflation, which will be the subject of a future blog post.

We’ve been brought up being told the government is just like a household: it needs to be prudent and not spend more than it takes in. The old balanced budget concept. It’s a seductive narrative, but it’s absolutely wrong.

Your and my households are constrained in what we can spend by what we earn, or how much we can borrow. A government is NOT like a household because of that key difference: a government can never run out of money.

Another future post will explain why a balanced budget, or worse, a surplus, shrinks the economy.

In the next post, I’ll explain what role taxes really play and why it is that a government actually spends first and then taxes.

When I began this series I promised a few things:

If your curiosity about MMT is piqued and you want to dive in, you can start by reading Stephanie Kelton’s excellent book, The Deficit Myth. 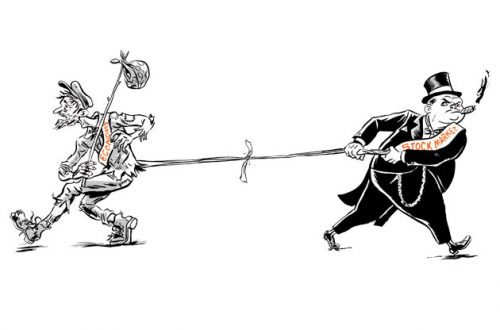