In case you haven’t heard, volatility has returned to global share markets. And as usual, the media is seizing the opportunity to make the most of a news event with sensationalist headlines designed to grab your attention. Now is a good time to focus on the sports pages.

There has been any number of commentators, including me, saying the remarkable run of low volatility we’d seen on markets over the past couple of years would come to an end. Nobody knew exactly when it would happen, but when the US market rose 7.5% in 18 trading days to start the year, that set up a pretty strong candidate.

In the last nine trading days the S&P500 has fallen (or in the words of most media reports been smashed, crashed, routed) 10.2% from its all time high. You’ll now be swamped with articles about how that’s a ‘technical correction’ (i.e. more than 10%) and speculating on when it will stop and whether we’re headed for a ‘crash’ (a fall of 20% or more). I have absolutely no idea when it will stop, then again, nor does anyone else. But let’s get some perspective.

The average intra-year decline for both the ASX 200 and S&P 500 is 14%, that means over the course of a perfectly normal year you can expect to see a correction of 14%. But over the same time total returns for both markets have been about 10% per annum (including dividends). In other words, despite the ups and downs, investors still make good money.

Volatility in both the US and Australia had been running at near record lows and has now spiked enormously – see chart 1 – in fact the US VIX has seen it’s biggest rise in volatility in six years. This has prompted people to look around for explanations. 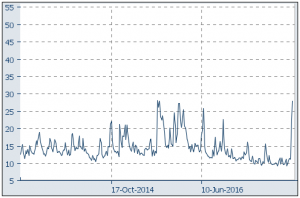 While you can never be sure of all the different things that combine to cause markets to do what they do, there are some interesting (conspiracy) theories doing the rounds on what role some newfangled volatility trading instruments played in the selloff. The FT wrote that “the unravelling of popular volatility-linked trading strategies that have proved lucrative in recent years played a key role.”

It’s not at all unusual that a bull market inspires the creation of new whizz-bang financial products. This time, the exceptionally low volatility has seen a raft of products you can buy and sell on the US exchange that allow you to bet on the VIX index. It was a lucrative trade to short sell those things over 2017 but that’s unraveled, very quickly, in the last couple of weeks. From the little I understand of these products, they were pretty hairy-chested things.

The fact Credit Suisse said it was forced to close an exchange-traded product that moves in the opposite direction to the VIX, effectively wiping out a fund whose market value topped $2 billion only three weeks ago, is evidence of how dodgy these financially engineered products can be. More than a dozen other funds apparently halted trading after they triggered limit-up/limit-down rules last Monday.

Again, from what I understand there has been relatively little in the way of retail selling, in other words mums and dads by and large have not participated in the selloff. Interestingly, I heard the head of private clients for a large US bank say they had seen almost no selling at all from their client base over this week. Likewise, here in our office we’ve not had anyone contact us worrying about what’s going on.

So although volatility has spiked, which can de disconcerting, there could be some sound explanations behind it. We need to remember, it’s been a long time since our friends in the media have been able to play the scare card to get readers’ attention. It’s what they do, we just need to retain some perspective.

Brexit: the lesson for investors