Last week’s August Australian retail sales figure was a clanger, with seasonally adjusted spending dropping by 0.6% from July, which in turn had dropped by 0.2% from June. Given consumer spending makes up about 60% of Australia’s GDP the news set economists racing to downgrade their September quarter GDP forecasts. Should investors be worried? That can be answered with a resounding yes, and no.

The first thing to notice about the retail sales numbers in the chart below is that, on a month to month basis, they are fairly volatile: while August was the lowest reading for three and a half years, only four months earlier April was the highest in two and a half years. What is more concerning though is the trend over the past few years, as shown by the blue year on year line, is definitely downwards.

but the longer-term trend is downwards 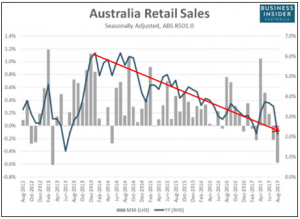 Why is that? It’s not difficult to come up with a bunch of reasons why we shouldn’t be all that surprised retail sales are on the weak side. For a start, wages growth is at a 25 year low at 1.9% for the 2017 financial year, which is bang on what inflation came in at. So with zero ‘real’ increase in wages (that is, after inflation), we can hardly expect a spending spree.

Add to that household debt being at an eye watering all-time high of 194% of GDP and it’s easy to see where families are putting their cash. Then there’s the added pressure of energy prices rising anywhere between 10-20% from 1 July, plus thousands of retail and hospitality workers losing penalty rates from the same date.

So you could ask yourself how it is Australia managed to record retail sales growth at all. It appears that at least part of the answer to that is households reducing the amount they save, as shown in chart 2.

at a faster rate than retails sales are growing 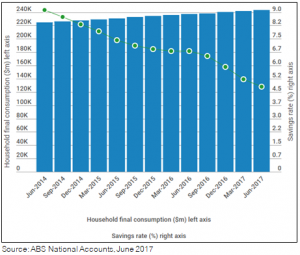 Household savings rates shot up to 11% during the GFC and have now dipped below 5% as households juggle bigger and bigger mortgages. For the halving we’ve seen in savings over the past three years there’s been about a 10% increase in retail spending. Again, that shouldn’t be a surprise: increasing debt is simply bringing forward consumption from tomorrow to today.

So why were economists taken by surprise? For a start, unemployment has been declining steadily over the past few years from 6.3% to 5.7%. That’s got to be good news, right? Well, again, it’s yes and no: more people have work but over the same period the underemployment rate, that is people not getting as much work as they want, has also gone up – see chart 3.

Chart 3: unemployment is going down

but underemployment is going up 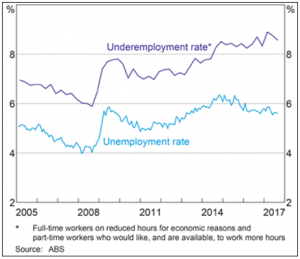 So if retail spending is on the low side why hasn’t the market tanked? First, the biggest reason is that historically there is no correlation at all between retail sales and the stock market. Just like, surprisingly, there is no correlation between GDP growth and the stock market. That’s evidenced by the ASX200 having gone up 10.1% since retail sales started trending downwards from January 2014 (29.7% including dividends).

Likewise, in the U.S. retail sales have gone up by a cumulative 0.3% in the seven months to the end of August, yet the market has risen 4.6% over the same period, hitting new all time highs along the way.

The takeaway for investors is that, like any single data point, soft retail sales never sounds good and may indeed be a signal that things aren’t so great in the economy, but when it comes to financial markets it’s only a small piece of the puzzle.

Geopolitical risk – to sell or not to sell?